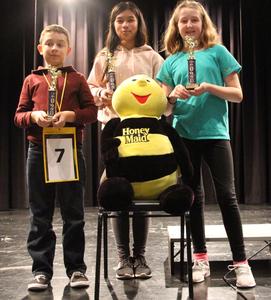 Gananda sixth grader Jenna Giles was once again victorious in the Gananda Spelling Bee held on Thursday, February 13.  This is the second consecutive school Spelling Bee title for Giles who also won the regional spelling title and went on to compete in the National Scripps Spelling Bee competition in Maryland last year.

With 32 participants in second through eighth grade, the competition for this year’s school Spelling Bee was strong.  After the completion of nine rounds, the top five spellers remained with Sydney Richards (seventh grade), Draven Winter (fourth grade), Jenna Giles (sixth grade), Melissa Giddings (sixth grade), and Gabriel Walters (sixth grade) still in the hunt. By the 18th round, Winter and Giles were the only remaining participants left competing for the top spot. Winter incorrectly spelled the word "vinyl" and Giles misspelled the word "Shepherd" so the two continued on in the competition. After over 20 rounds, Giles correctly spelled the winning word "Louisiana," and was declared the victor.

For the next step in the competition, Giles and Winter will continue on to compete in the Wayne Finger Lakes Regional Spelling Bee Competition to be held in March at Hobart William Smith Colleges in Geneva, NY.